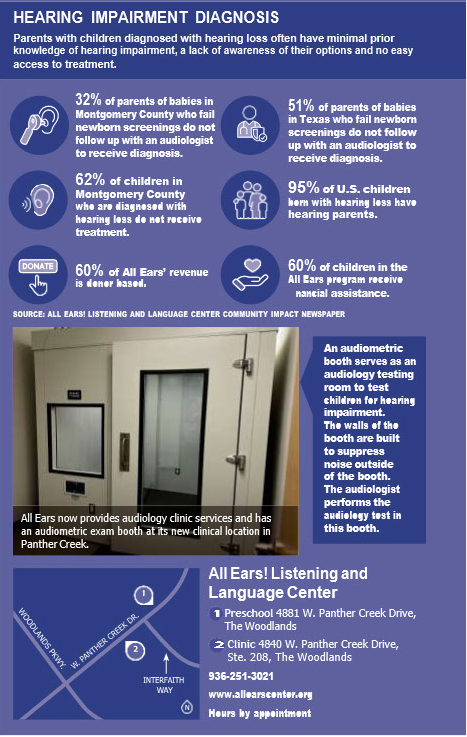 All Ears! Listening and Language Center

When Lee Rech’s daughter, Anna, was diagnosed with profound deafness, Lee and her husband were told their only option was to teach her sign language.

“They told us to go to the bookstore and buy this book called ‘Choices in Deafness’ and to learn sign language. We did it in tears,” Rech said. “Every chapter was dedicated to a different option of
communication. … At the very back of the book was a section called ‘Auditory Verbal Approach,’ which is now the listening and spoken
language approach.”

Listening and spoken language learning is the specialty of All Ears! Listening and Language Center, Rech’s learning center for children who are deaf or hard of hearing.

“We just got such hope,” she said. “It was just a game changer for us, and we immediately said, ‘I don’t know how, I don’t know where, but we have to find this.’”

The Reches found a therapist who agreed to work with Anna, and they spent the next few years traveling back and forth from Houston and Denver for treatment. While traveling, they understood the need for better access to this kind of treatment, Rech said.

“It’s so needed in this community… This is the only place that these
kids can learn what we’re teaching them,” Rech said. “We are the only
center in the North Houston area where we’ve completely focused on
the LSL approach.”

When the center opened in 2014, six students were enrolled in the preschool portion of the center. Now, Rech said 48 children are enrolled across the preschool, therapy and the soon-to-open audiology clinic All Ears offers.

The center’s preschool allows hearing-impaired children to learn alongside their hearing peers, which Rech said is important for learning.

“The hearing children are really good speech role models for the hearing-impaired children. We know that with good audiology, what goes in comes out,” Rech said. “If a child is hearing good speech from a peer… or whatever that child’s speech is, that’s what they’re going to be able to reproduce. The idea of inclusion in mainstream is so important for that reason— they’re picking up those same dialects or same cues or same colloquialisms that a hearing child will be speaking.”

Allison Haggerty, the center’s director of speech and LSL intervention, said in Montgomery County, 62% of children do not receive appropriate intervention in a timely manner following their diagnosis with hearing loss. Rech said this is due to a lack of access to services,
a lack of awareness of the different options and long waitlists.

“That’s the real crime of it all,” Rech said. “In today’s world, these babies, if they get detected and get amplified right away and get into a program, there’s just no reason why they won’t have lovely speech and get into mainstream education at the earliest possible time.”

Rech said All Ears allows her to give back to the community.

“Seeing the same hope and inspiration that our families get by working with these brilliant experts, … it’s so rewarding,” she said. “I know what the outcome looks like; I know how scary it was in the beginning. I know how confusing and how hopeless it can feel. We’ve seen the path; we’ve seen the journey, we’ve seen the model; we know it works. It’s just really affirming to be able to do it for these families.”